Home » Behaviour » Catnip: what is it and how does it affect cats? 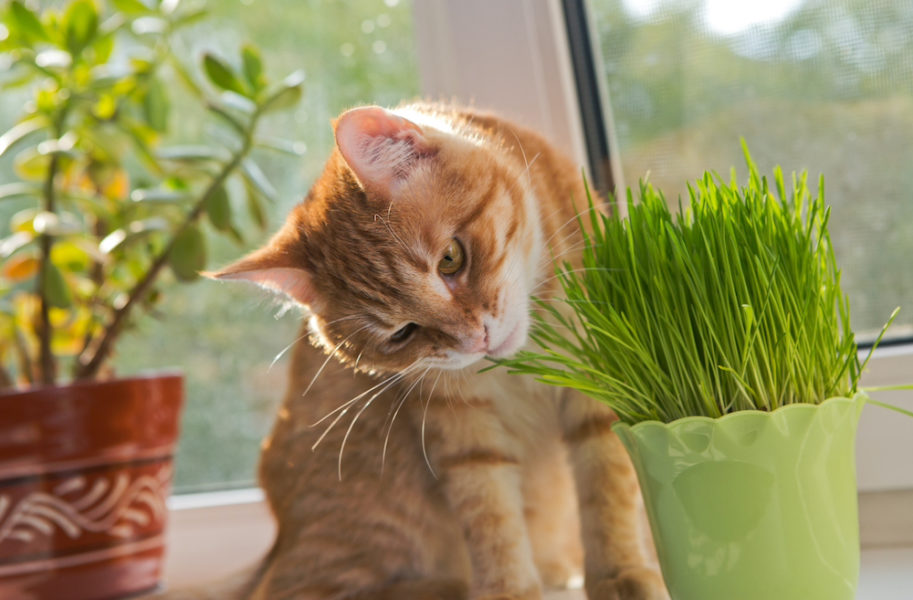 Catnip has a reputation for being the marijuana of the cat world.

However, this may leave you to wonder how safe it is for your pet. You also might wonder how it works and if your furry friend can become addicted.

Catnip is a perennial herb that comes from the mint family. It is native to Asia, Europe, and Africa. It was brought to North America and easily spread from there. Today it can be found in gardens and yards — both planted on purpose, but also growing wild.

Your cat will likely prefer the nepeta cataria variety because this is the one that has an active ingredient — the volatile oil nepetalactone — that’ll affect your pet. It even changes the behavior of some other species of cats besides domestic ones.

Not all cats will experience behavior changes from catnip. In fact, only between half to two-thirds will actually have a response to the oil. Kittens are less affected. When they mature a bit, they’re more likely to get high.

You may find toys that already have catnip in them, or you may grow a plant yourself. The toys contain either dried leaves or finely ground catnip. You can also find dried catnip in pet stores, which you can sprinkle on your cat’s bedding or toys. You can also find mists that you can spray on your cat’s toys and bedding. Sometimes, you can find cat treats that have catnip in them already.

What does it do to a cat

When you give your cat catnip, you might notice that he or she will start to act a little funny. You might notice he or she will sniff, shake his or her head, lick, chew, or rub against things more frequently than usual. Your cat might roll around more, walk differently, or become more hyper and excitable than normal, too.
Some pets may drool or they may become aggressive from contact with the plant. Other cats, however, get into what looks like a stupor. Generally, the effects only last for between 5 to 10 minutes before they wear off, and your cat will return to normal. This is especially beneficial if your cat has never had catnip before and has a bad reaction to it.

How catnip causes the effects it does

You may find it amusing watching your cat race around the house or just act peculiar in general. The reason this “high” happens has to do with the fact that your cat inhales the nepetalactone compound that’s found in the plant.

Once the nepetalactone binds with the receptors in your cat’s nose, it then will light up the neurons that lead to your cat’s brain. In particular, the chemical stimulates your pet’s hypothalamus, olfactory bulb, and amygdala. It seems to affect emotions, at least somewhat, and gets kitty a bit drunk.

Initially, scientists believed that the active ingredient in catnip stimulated the vomeronasal organ. This particular organ is one that’s found deep in the nose of certain mammals. Humans aren’t one of these mammals that have this organ. This organ detects pheromones, which is why researchers believed that catnip had an effect on it. However, researchers later discredited this theory.

Generally, catnip is safe for your cat because it’s all natural. However, some cats don’t respond well to the plant and may get queasy or act oddly after contact. They may not enjoy the experience. On the other hand, certain cats enjoy the rush and the mood change the plant gives. You won’t know how your cat responds to the plant until you try it with him or her because there’s nothing about your cat that’ll tell you how your cat will respond.

Your cat won’t overdose on catnip. Generally, once your cat has had too much and doesn’t feel well, he or she will stop and decide she’s had enough. However, you don’t want to put catnip in your cat’s dish. Your cat could easily consume too much and experience digestive issues.

You also won’t know how much your cat can handle at one time. Your cat may only be able to handle small amounts at a time safely, or he or she may have a higher tolerance.

You don’t really have to worry about giving catnip to your cat too frequently, either. Your cat just won’t partake if he or she isn’t in the mood for the high that the plant causes.

Your cat may enjoy catnip, or he or she may not. You won’t know until you give it to him or her.

One thing is certain, however. Catnip does not have the same effect on humans. In the past people have tried to smoke it like marijuana, and during the 1960s rumors spread that it produced a high and hallucinations. Studies were done to find the truth: Catnip is best left to felines.

Patrick Bailey
Patrick Bailey is a professional writer mainly in the fields of mental health, addiction, and living in recovery. He attempts to stay on top of the latest news in the addiction and the mental health world and enjoy writing about these topics to break the stigma associated with them.